(Note: Nigel Venters found this article that is a basic, layman’s description of nuclear polyhedrosis, and stated that this article was consistent with his experience raising butterflies for 50 years. Amanda Lawrence was asked to review the article and gave her opinion below. There is agreement between many scientists that it is unlikely that larvae will survive nuclear polyhedrosis, but that it is possible if the dose is low enough and the larvae is in it’s later instars when infected – so butterfly farmers need to be aware that it is highly unlikely but possible that an npv-infected larvae might pupate and emerge.)

One of the worst things that can happen to you when rearing your own butterflies is to look upon them as they turn brown, shrivel, and begin to ooze a brownish liquid which stains any surface they are on.

Colds and flus are the viral enemy of mankind. They plague every waking hour of our existance. They make us sluggish and sore, make us run high fevers, and some may even cause brain damage and/or death. But most are defeated by or immune system, which actively seeks out the virus to destroy it. Not so with caterpillars. (As far as I know they have no ‘immune system’ as we see it.)

The Nuclear polyhedrosis virus attacks the very cell structure of the caterpillar, rearranging it at the atomic level, forming ‘crystals’ which are, basically, inanimate and incapable of maintaining life. The process of slowly killing the caterpillar takes close to 3 days. At the end of which the caterpillar will lose all bright coloring, and fade to a murky brown or grey/brown and die. If left alone for long, it will eventually turn black.

Some common symptoms of the virus are:

First and foremost, let me make this statement:

This is a deadly virus!

I have not seen a single caterpillar which has this virus survive. Period.

Any infected caterpillars should be removed and destroyed immediately upon awareness of the infection. (If you only suspect infection, I would reccomend isolating the caterpillar from the general population for at least 3 days to be sure. You will know by the end of the three days if it is infected or not.

Can the virus be transmitted to humans? NO.

This virus requires an ALKALINE based cell structure in order to replicate itself. We mammals are acidic based, and are therefore unable to mass produce the virus. HOWEVER, the virus can enter our cells, where it will remain dormant until destroyed by our immune system.

How does the virus spread?

The virus creates these crystalline structures, which are present in the droppings (scree) left behind by infected caterpillars. It is also present in any regurgitated fluids and any other liquid left behind by the infected caterpillar. When another caterpillar eats anything these crystals are on, it will catch the virus and eventually die. (The reason it only happens when the virus is eaten is because the digestive tract of the caterpillar, beling alkaline based, breaks down the crystals, releasing the now-active virus.)

How can I keep the crystals away from the caterpillars?

There are a few methods which seem to work for destrying the crystals. One such method is to rinse all leaves being fed to the caterpillars with a weak (less than 10%) chlorine bleach solution followed by a water-only rinse to remove the bleach. This method is also effective for all containers and other instruments which may be used in handling or containing the caterpillars. One note: Your hands are also a means of spreading the virus. If you fear your hands have become covered in the virus, I would suggest washing them in as much bleach as you can personally stand.

According to some research done on the virus, it has been found that ultraviolet light is effective at killing the virus as well. If you suspect that rearing tanks or other instruments are possibly infected with the virus, it would be wise to expose them not only to the bleach solution (which destroys the virus), but also to strong ultraviolet light to kill any still-living virii left behind. (Or if you feel that using bleach will damage or destroy the equipment, or otherwise render it unsuitable for use with caterpillars.)

On the preventative side, it is wise to not let condensation build up on any surfaces which larva may come into contact with. A wet surface is nothing more than a means of quickly spreading any infection between larvae. I have found that any larva exposed to wet conditions for more than 1 day are 80-90% more likely to die from this disease or something similar. Drier is better as far as rearing larva goes, unless the specific species of larva actually prefers a moist environment (and I wouldn’t put it past good ‘ol Mother Nature to design some species which actually do.)

Scientist Amanda M. Lawrence of MS State U. reviews the above article….

I agree with the article in ‘whole’. Do not like her use of the word “crystals” thought to describe the polyhedra nor do I like “rearranging at the atomic level”. Viruses become part of the hosts genome and the host makes the virus.

Viruses can remain in that latent state (attached to genome) and it is not always know what the trigger is to cause the host to produce more of the virus and then in turn show signs and symptoms. The polyhedra are formed due to viral infection and they grow, enlarge, fill up a cell. The cell bursts and that is why the insect virtually ‘melts’.

Also some of the signs and symptoms described are also the same for bacterial infections (Bt for instance), so someone needs to ID the polyhedrosis as if it is bacterial maybe things could be salvaged.

Some larvae CAN survive infection – it is not likely as NPV is acute – however if the larva is exposed late enough in its development and at a low enough does, it can even emerge as an adult.

Am also not sure about her assessment of using UV light as a treatment. Thought that was one thing that the ‘polyhedra’ did was protect the virion from harsh environmental conditions. Also UV does not penetrate well, and stuff needs to be only inches from the source to be beneficial.

Have attached a symptomatic insect if Linda wants it. Also have a photo of polyhedra in a stain if she wants that. 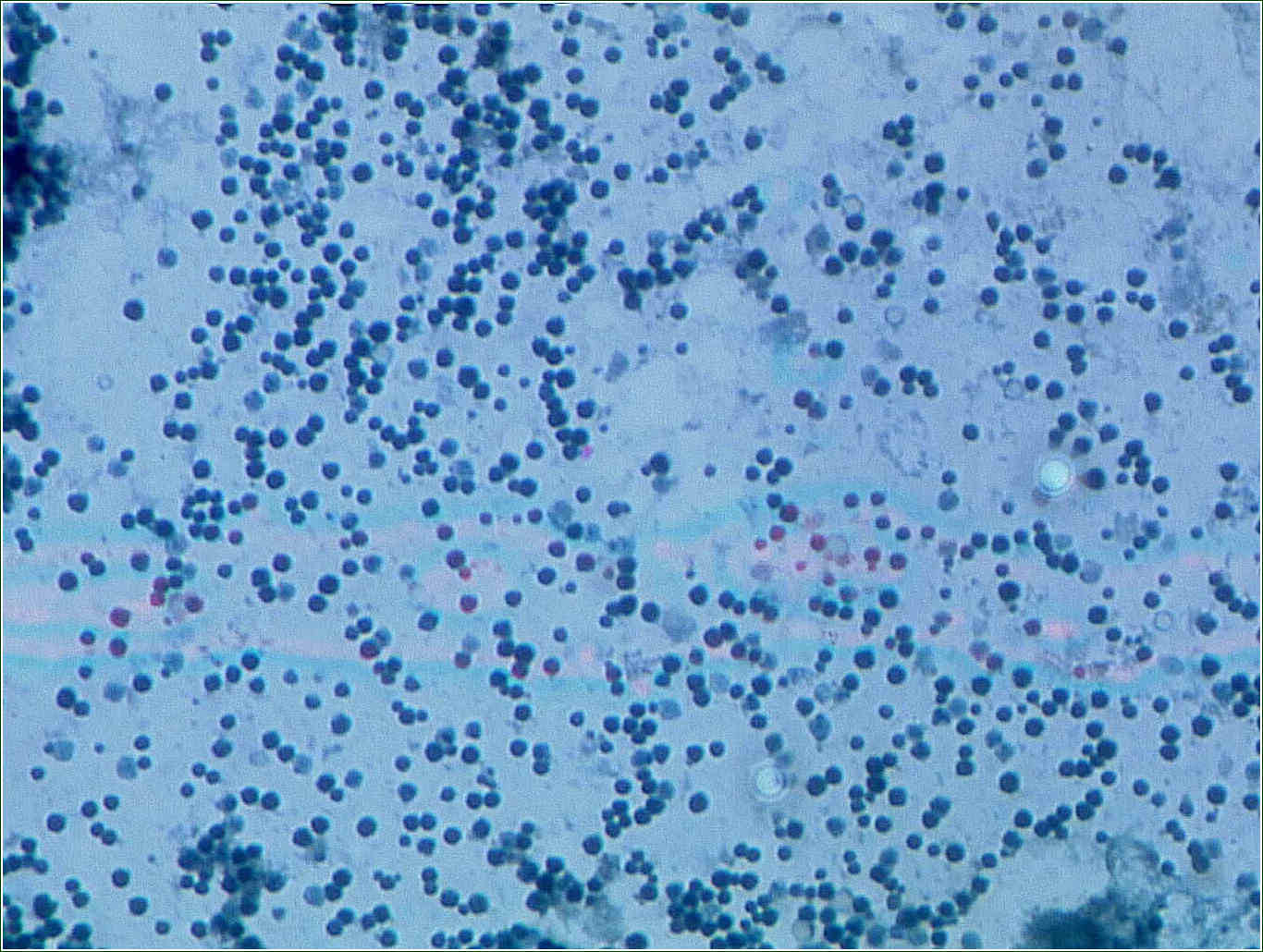 This stained slide of Polyhedrosis was supplied by Amanda Lawrence.